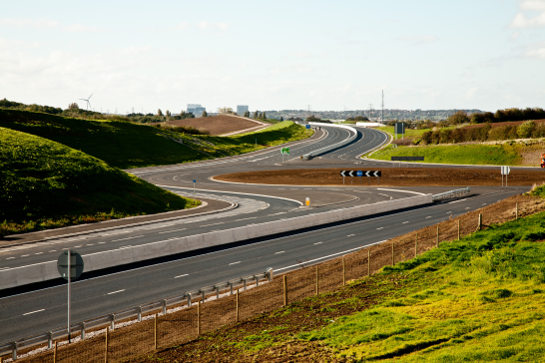 IRISH SEA freight  ferry operator Seatruck says the opening of the new £124.5million Bay Gateway relief road in Lancaster, is the biggest commercial opportunity for the Port of Heysham in its history.

Seatruck CEO Alistair Eagles said the opening, on October 31, is the long awaited ‘big bang’ moment for the Port of Heysham. He said it unleashes the port’s potential to win more Irish Sea tonnage from hauliers who no longer have to wrestle with congestion between the M6, Lancaster and the Heysham peninsula.

“This is the moment we have campaigned and worked years for,” he said. “The Bay Gateway thrusts Heysham firmly forward as a growing hub for Irish Sea freight. Our big message to hauliers, and any company operating cargo across the Irish Sea, is think again, think Heysham, think Seatruck.  At Seatruck we can offer a hugely attractive alternative to remote ports like Holyhead and Cairnryan by using the more central ports we operate from Heysham, Liverpool and Bristol.  A large percentage of Cairnryan’s tonnage drives past Heysham on the M6 as it originates in the North of England and the Midlands. This is a mammoth journey of 176 miles which takes more than three hours. It really is much easier to simply drop into Heysham slashing fuel costs, mileage, truck wear and tear and carbon emissions.  It makes real sense at a time when hauliers and supermarkets are bending over backwards to be eco-friendly on the roads.”

Mr Eagles said in preparation for the Bay Gateway opening Seatruck has added the 105 trailer Clipper Point to its daily Heysham-Dublin route increasing annual capacity by more than 25,000 extra spaces a year. She will join her two sister vessels Clipper Pennant and Seatruck Panorama which already operate between Heysham and Warrenpoint in Northern Ireland. In total Seatruck now offers 12 crossings a week between Heysham and Dublin and 22 crossings a week between Heysham and Warrenpoint. Mr Eagles said the Bay Gateway is also a platform for Seatruck to raise awareness of its unaccompanied truck operation.

“Seatruck has long believed that the future of Irish Sea freight is to free up drivers,” he said. “HGV drivers are becoming harder and harder to find. Seatruck is challenging the traditional model of short sea crossings from North Wales and Scotland with drivers staying with the trucks to offering a more efficient alternative. Our operation offers hauliers the option of drivers dropping off the truck and then instead of being stuck on the ferry they can go on another job. This maximises driver time on the road and a scarce resource. We have listened to industry and we think this is a genuine problem solving initiative. Even before the Bay Gateway opening we had grown our share of Irish Sea tonnage by 18.9pc this year, roughly three times the market level, while our competitors have stood still. We believe this is proof that our dedication to customer service combined with our unaccompanied driver model is working. The Bay Gateway will catapult us to the next level and make us even more competitive.”