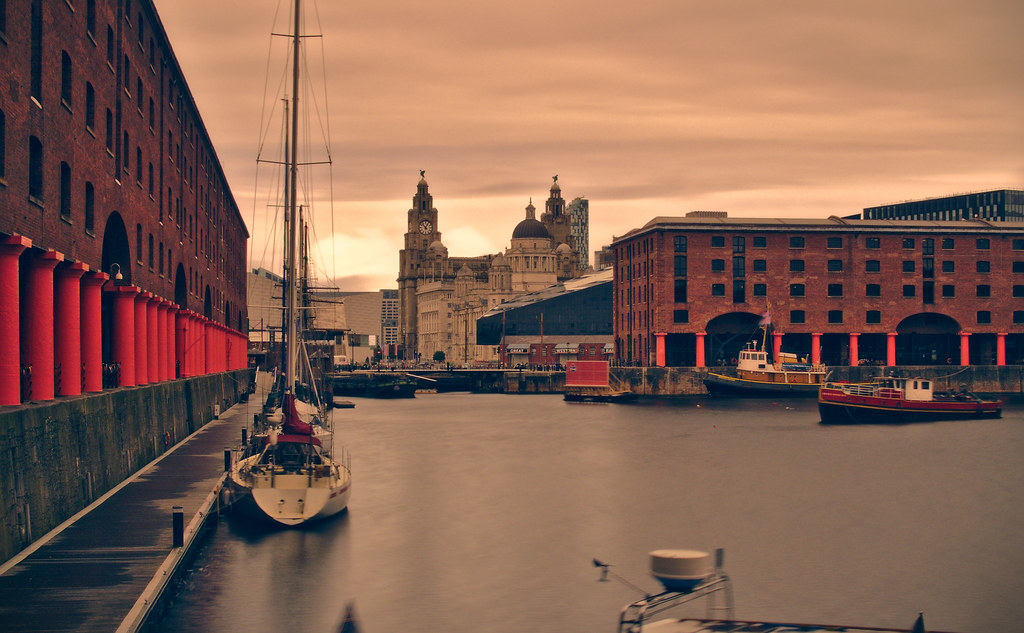 In part one of our exploration of the iconic city, we focus on Liverpool’s historic maritime landmarks…

Royal Albert Dock
Designed by Jesse Hartley and Phillip Hardwick and opened in 1846, the Albert Dock (it didn’t achieve Royal status until 2018) was considered revolutionary at its time due to the docking system which allowed ships to be loaded and unloaded directly to the warehouses. The warehouses themselves were the first structure in Britain to be built without structural wood, also making them the first non-combustible warehouses in the world.
After the Second World War the dock fell into disrepair and was eventually closed in 1972. Following investment and renovation the dock was officially reopened in 1988, receiving further funding and development throughout the nineties.
Today the dock is one of the most visited attractions in the United Kingdom, housing the Beatles Story, as well as the Merseyside Maritime Museum, and the International Slavery Museum – the only museum in the world dedicated to the history of the transatlantic slave trade. Numerous shops and restaurants now occupy the once derelict warehouses.

Three Graces
Located on Liverpool’s Pier Head, the Three Graces consist of The Royal Liver Building, The Cunard Building and the Port of Liverpool Building.
Atop the Royal Liver Building sit the famous Liver Birds, an emblem of Liverpool used and found throughout the city.
The Cunard Building is now a Grade II listed building created between 1914 and 1917, and headquarters of Cunard Line until the 1960s. Today the building is home to numerous organisations, most notably housing The British Music Experience.
The Port of Liverpool Building was home to the Mersey Docks and Harbour Board until 1994. Most notable for its large dome, the Grade II listed Edwardian Baroque style building underwent a £10 million restoration between 2006 and 2009.

Atlantic Corridor
The Atlantic Corridor is an ongoing development of 148 acres of the historic dockland surrounding Stanley Dock, aiming to regenerate unused premises and house start-up businesses across the Liverpool Waters.
Tobacco Warehouse, the world’s largest brick warehouse at 38 metres high and covering 36 acres, is part of the huge renovation project which aims to convert the building into stylish, state-of-the-art apartments. With the nearby Ten Streets district, the area is now a thriving creative hub aiming to create upto 2,500 jobs.
Just across Stanley Dock from Tobacco Warehouse is the award-winning Titanic Hotel Liverpool, which along with its Rum Warehouse and subterranean Maya Blue Wellness, offers an exceptional experience whether it’s for a wedding, conference, banqueting, or weekend getaway.

In part two we will explore some of the attractions to be visited, and just how much Liverpool has to offer when you travel with Seatruck from Dublin.